Missing only the Battlestar Triton from the Peace Envoy at CIMTAR (the openings of the original Battlestar Galactica series and film), here are the other four that were built and painted from the Salzo kits by artists Dan Grumeretz and Marc Elkins. They include the Battlestar’s Galactica, Atlantia, Pacifica and Acropolis. All painted differently to identify them each by their color scheme and detail. Dan and I were in a rush that day, and set these up quickly in my home office. Thus the unfinished shots never came to be. Never the less… I thought we’d share a few shots quickly taken that day. Please remember that this is my home office…and not truly set up for this… LOL. Of note: The mystery Battlestar seen in a few shots is the study model originally starting it’s life for the upcoming Singer/DeSanto Battlestar Galactica film, and with a few ownership agreement issues, and with even more design changes, then became for the Kuhn Global Productions, Battlestar Galactica origin story of “13”.
Kurt Kuhn
Kuhn Global, Inc.
Modeler’s Miniatures & Magic

EACH Battlestar pictured has a 2016 Modeler Magic appraised value of $15,000 USD 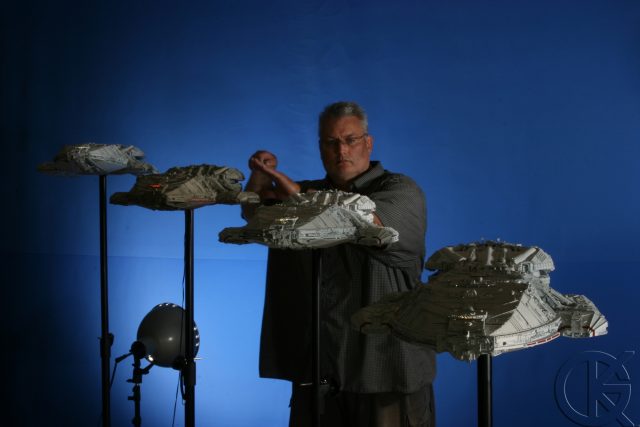