BELOW: March 28, 2019 – Dan Grumertez and Kurt Kuhn viewing the assembled size of the model as it is first placed on it’s armature.

It was only this past December 2018 that this build really kicked into high gear when my wife Melanie and I made the decision to donate this model to The Museum of Science Fiction. Being that 2019 was the 40th anniversary of Star Trek The Motion Picture’s release, what better way to celebrate that fact than to have the world’s first studio scale sized miniature for all to view. With that in mind, suddenly there was a looming deadline that felt more and more like that of a Hollywood film deadline. HA! Some of you reading the article know this feeling! LOL. What is very memorable is how many challenges came up during this short 5 month period, including no sleep for the entire last 7 nights before a very late departure to get the model to the Convention in time that was located across the country.

The Push is ON!
Hours were increased greatly at this point…

As you can see in the above photos, we had received the light & sound boards from HELIOS Models & Lighting in Germany, and the armature parts that were fabricated by MARZEE Fabricatiors in Phoenix, AZ. The primary hull armature, being that it would carry great weight, was made of steel. Dan designed it to house the entire Shuttle Bay within it. Again.. this feature was a bit wasted since we did not use the Bay after all. That stated, Dan’s design of it was perfect for this feature, and very strong. The Pylons were also made of steel, and even though they were made thick, they still had the issue of having “flex” in them. That is when we had welder Tyler Harshman strengthen them by adding angle iron. It did a great job in stopping the ‘flex’ that was happening. The neck was made of elevated sections up to where the saucer section would connect. Being that the saucer is massive, the armature needed would need to be a more light weight material, yet strong to last the ages to come. We decided upon aluminum for that purpose. Even so, the assembled armature part was very heavy… especially with the fiberglass parts attached. The neck would eventually be strengthened to hold it all straight and firm.

The Light and Sound board that HELIOS built for us is fantastic, providing the entire music and light-up sequence for the Enterprise as it starts up and leaves the Space Dock for the first time in Star Trek The Motion Picture, then going to warp speed with a bright flash of the engine nacelles. We also asked Daniel Beck of HELIOS make it so that on the 15, 30 and 45 minute of each hour the vessel would drop out of warp (with appropriate Impulse Lighting) and fire two volleys of Photon Torpedo’s before going back into warp. Three minutes before the top of each hour, there would be a drop from warp speed sound, (like every 15 minutes before that), and it would go into a complete power down… as if it were back in Space Dock again. Then at the top of the hour the process would start all over again. This made for a very crowded viewing area around the model as each new hour began. It was very cool to witness everyone’s reactions!

At this time I brought on a professional cabinet maker, Dustin Ashton, to build the base we designed together, and the crates the model would travel in. Dustin made this base beautiful, and the cabinet made for great sound with the speakers installed.

In these next photos you will see more progress, and even famed Appraiser Leila Dunbar with us. Famous for the Antique Road Show, and having appraised the full sized Shuttlecraft Galileo prop, among other rare and high priced items, Leila will be doing the final appraisal on this piece. You will also see the moving Van (Box Truck) that my wife Melanie and I drove the model in while traveling over 2,500 miles in 3 days (on our wedding anniversary, no less) through the worst weather possible… Snow, Tornado’s, Winds, Torrential Rains, and 5 foot visibility Fog! It was a true adventure we shall never forget… and we did it with the Starship Enterpirse!! Potholes be damned!! LOL.

Dan spent the last hours of the darkened night, which was now morning, working on the wiring of the model. He literally had a mass of wires that would be the last connections of what HELIOS Models & Lighting provided to us to bring the Enterprise REFIT alive. Dan completed the last solder connection, and brought it over to my home to be set up for the first time, and tested. It was at 3:12am on 5/20/19 , in my own garage, that this model would be turned on for the first time. I had tears in my eyes, and the room was silent. Dan Grumetez, my wife Melanie, William McVey, Sr. and the cabinet maker Dustin Ashton, (whom both came over to assist in those early hours), along with myself simply watched it come alive for the first time.

Note that at this point, these are NOT photos of the completed Enterprise.
It still needed much work when it arrived at Escape Velocity.
These do show the first assembly and activation.
You will notice that even some of the paint mask still required removing.

Everyone already knows that I take Blue Screen photos of every model that we create, or comes through here. I was saddened to be unable to properly do so due to time constraints. With this projects challenges creating delay after delay, Melanie and I were going to have to drive hard to get the Enterprise to the Convention Center on-time. Basically we had three days to cross the United States from where we are located in Arizona. Through the challenged weather I previously mentioned,..we made it! This model was meant to be seen, and nothing would stop us from getting it to it’s destination!

ABOVE: May 20, 2019 The Enterprise is crated up for the first time in order to travel in a small moving truck.. over 2,500 miles in three days

ABOVE: May 23, 2019 Kurt and Melanie arrive at Escape Velocity with the Enterprise safely still in it’s crates. Dan had arrived one day before via a plane in order to be there for setup on time. The Enterprise traveled very well in the crates Dustin Ashton built for it. There were some minor issues, and some sort of debris on the main saucer from the foam, but considering the trip this model just endured… I can state it came through exactly as every Enterprise always does.  OH! Yes.. that IS Lou Dalmaso in the photo! LOL.. Lou was extremely helpful is un-crating and setting the Enterprise up for Escape Velocity. Thank you Lou!

ABOVE: May 26, 2019 – Kurt Kuhn introducing (Behind Kurt, from Left to Right) Clint Borucki, Dan Gurmeretz, George Takacs, and Lou Dalmaso

Unfortunately, during our Panel at the 2019 Escape Velocity Convention, my Laptop ceased functioning and we therefore had nothing to show everyone of this amazing build. At least now we may correct that for all to view and appreciate. My apology for that. I do hope these photos will show you how amazing this build was, as well as the skill, efforts and cost to make it come to life. Many were involved, and it was very worth every moment, and every penny spent with all of them.

Thank you to everyone…

When Melanie, Dan and myself witnessed the amazement and wonder of the crowd around the Enterprise, all of whom became absolutely silent as it started up at the top of the hour, it became clear to us that what we did was the right thing to do in our decision to donate the model to The Museum of Science Fiction. As we watched many tear up in joy of seeing something they had dreamed of, we are confident that what we shall do in the future with the Museum is the right course. It is obvious that this art form must be seen. It has been missed somehow in all of the Museums of the world. Together, as we make the Museum of Science Fiction a reality, the Museum shall have much to show everyone of an art form screaming to be seen, screaming innovation, and made from the talents of so many artists all over the world. It shall promote the art form, and give back to it in ways of commission works, not to mention the donations it shall oversee that will make a difference in the world. It shall inspire, and bring people together.

BELOW: May 25, 2019 – The Crowd viewing the USS Enterprise at Escape Velocity 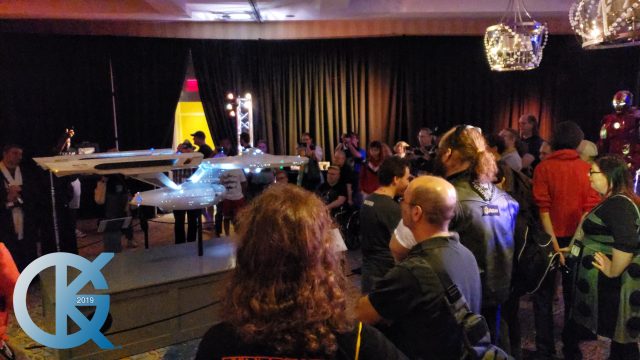 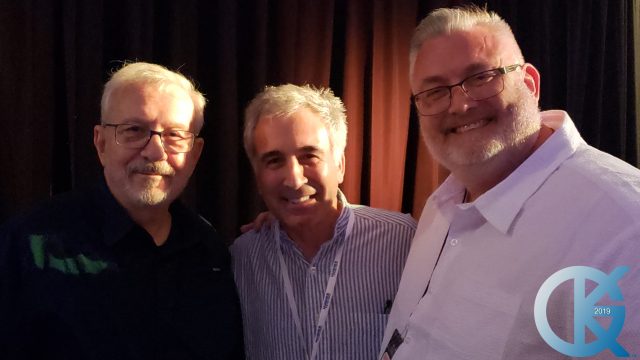 So much came from this build. I wish to thank everyone, especially all those who visited this amazing model. Your reactions made every challenge worth it. Thank you to MOSF’s Greg Viggiano, Mandy, Rachel, Nico, Keith, Jason, Shauna, Steve, Chris… Lou Dalmaso… all of you either hosting, or helping at Escape Velocity. Such a great event,…you are amazing!! Thank you George Takacs for starting something great, and bringing these parts to reality. Thank you Clint Borucki and your team at ACME Design in fabricating parts George created. Thank you Marc Elkins for starting this project for me. Thank you Marzee Fabrications, Tyler Harshman and Goldencalf Studios for your part’s in this. Thank you Randy Johnson for helping in areas that were vital. Thank you to Samuel and Isaac Grumeretz,… your patience and assistance were invaluable. Thank you Dustin Ashton,… your excellence in cabinet works is second to none, and brought this piece to greater heights. Thank you William McVey, Sr., you and Dustin provided much support when we really needed it. Thank you to my beautiful wife, for putting up with my collecting habit, and with whom I could not have gotten through this. That long drive together, facing what we did during all of it, I shall always remember that adventure with you, even through my fading memory. Thank you, thank you, thank you to artist Dan Grumeretz, who truly brought a legend to life… the world’s first studio scale USS Enterprise Replica from Star Trek The Motion Picture! You are a shining star, and an artist whose works stands among the best in the world today. I am grateful! I am grateful to you all!

Thank you to all…
…this is only the beginning!