This is a design worth drooling over. The standard studio scale Thunderfighter design was added to (by the model makers of Buck Rogers) in order to make what was considered to be an earlier version of the advanced Thunderfighter that were flown on screen by the Earth Directorate in Buck Rogers. This one was flown by Colonel Traeger. Often referred to as the “Happy Birthday Buck” fighter model, this is the world’s first known accurate replica ever produced of this model. We have seen many attempted before this that look quite amazing, but none that actually replicate it all… like artist Dan Gurmeretz did on this replica. Utilizing the damaged model of the studio scale Thunderfighter (SEEN HERE) that R.L. Bleecker built years ago (from a generational kit that was sold to me by Steve Neisen), we thought it best to use it for this design. The original Thunderfighter replica that R.L. Bleecker had built was badly in need of repair after being loaned to be shown, and shipped around with a company that would soon release the studio scale Thunderfighter replica. With that model ready to go, Dan set off with the additions needed to make it a true replica. It turned out beautifully. 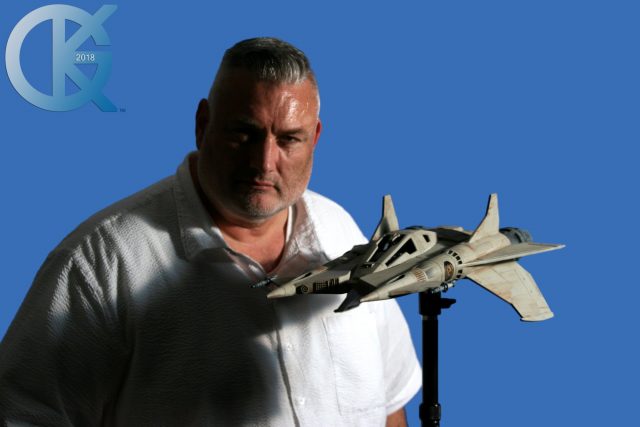 ABOVE: Kurt Kuhn with the Studio Scale Traeger Thunderfighter Replica