What can I say? I have dreamed of this piece for quite some time…. and I know many of you have as well.

Built from the amazing Richard Long studio scale Klingon K’TINGA kit (of which only 5 or 6 were produced), artist Dan Grumeretz took extra care to make sure this piece was as accurate as we could make it to be K’RONOS One. Utilizing the Jim Creveling photos of the actual studio model (Seen Here), Dan replicated the details that were not on the K’Tinga Kit. He modified the neck mating area, the Engine Nacelles, the Bridge, the rear…. just about everything other than the shape Richard amazingly created by hand. We even recreated the patterns for the photo etch, sending them out to a company that is unfamiliar with this art form… just so this would be a surprise to everyone… LOL. I asked Dan to place in full lighting…. including the navigation and blinking lights, and the Torpedo Bay which lightly burns… like the embers of a fire almost out… extremely nice to view. Even the wiring on the outside of the ship, going down the length of the neck, we replicated. One cannot really touch this piece as their hands or clothes may get caught on the many pieces of photo etch upon it’s hull….. it is everywhere! I asked Dan to replicate the splotches of gold painted on here and there to make this K’Ronos replica as ornate as the original. It is magnificent. Dan did a fantastic job…. as is his usual. Thank you Dan! And though he is no longer in this art form…. thank you Richard.

Photographing this was a real treat, albeit having a new setup, and the fact my eyes are not great any longer…lol. That stated, this is K’Ronos One, and my excitement levels are through the roof!

In my new photography area, my lighting is a bit challenged, yet I managed to get some good shots of this beast. I will endeavor to fix my lighting issues for the next piece coming up. Dust is also a bit of a challenge here… lol. Keep in mind that some of these are extreme close-up photos, and as such reveal tiny things that one would not normally see with the naked eye.

This was a joyous experience…. and I am so thrilled to have this in the collection here.

As stated above… Richard Long in no longer in this art form… and no longer produces anything within it. That stated… if one were to want a studio scale K’Tinga Kit…. one might try contacting NICE-N Model Designs. Word has it they have beautiful patterns and the ability to produce such a kit.

OH! I almost forgot. I am getting old…lol. Check out the two film composites I made using actual captures from the film, and the model in the blue screen photographs.

Above: Kurt Kuhn with the K’Ronos One Replica 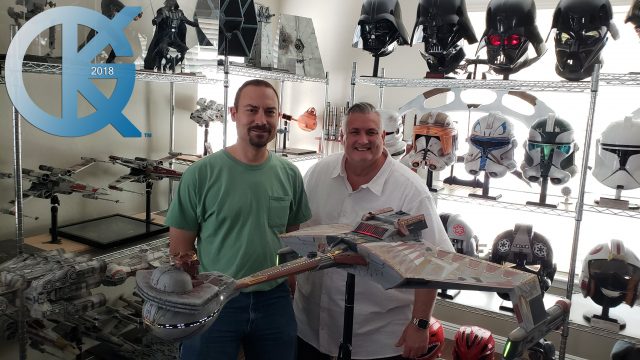 Above: Dan Grumeretz (left) and Kurt Kuhn (right) with the K’Ronos One Replica